"Lightning first, then the thunder." 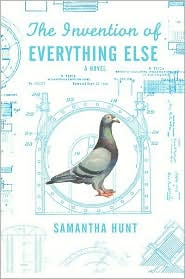 If you are in the mood for a historical fiction that is much heavier on the fiction than the history, try Samantha Hunt's novel about Nikola Tesla, The Invention of Everything Else. If you aren't familiar with Tesla, he was a very prolific scientist who, among other things, worked with electricity and had an awesome lightning lab in Colorado Springs. A version of the lab was featured in the Christian Bale/Hugh Jackman movie The Prestige with Nikola Tesla played by David Bowie.

This book incorporates Tesla's bizarre love of pigeons, his obsessive-compulsive disorder and his friendship with Samuel Clemens into a story about a man coming to terms with death. We also see a little bit of the rivalry with Thomas Edison, Tesla's former mentor. This story is actually focused on a young woman, Louisa, who is a maid at the Hotel New Yorker where Tesla lives at the end of his life. Louisa is a young woman always living in the shadow of her father's love for her dead mother. She goes to clean Tesla's room and starts reading his biographical papers and becomes interested in his past. This story took off in some pretty bizarre directions (think time travel) and was rather disjointed but it has inspired me to learn more about Tesla so I will be picking up a book that Hunt suggests -- Tesla: Man Out of Time by Margaret Cheney.

And for your viewing pleasure, here is the man himself, supposedly quite a favorite of the society ladies at the time even though he saved himself for science. 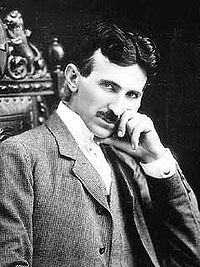 
Buy The Invention of Everything Else

and Tesla: Man Out of Time

on Amazon or find them at your local library.
Posted by Kristen M. at 12:18 AM