New Release: What Would Jane Austen Do? 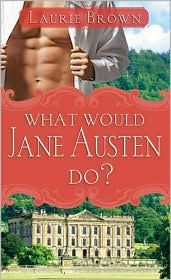 I guess this is my year of trying books that I would not normally read. This was the second review book that I somehow missed was a full-on romance! Laurie Brown's What Would Jane Austen Do? is the story of Eleanor Pottinger, a modern-day movie costume designer who is in England trying to start a business making Regency-period costumes. When a pair of ghostly Regency sisters transport Eleanor to their time period to right a wrong, she meets the love of her life *and* Jane Austen! But is this mysterious man really a womanizing cad who will be the downfall of the innocent sisters? And why does he think Eleanor is a Napoleonic spy?

This is a fast-paced book with a fun plot. I still wasn't completely comfortable with all of the sex scenes but they were mostly brief (for the reader). I also felt that the ending was just a little too convenient and beneficial to Eleanor but I guess that's part of the romance -- the "happily ever after". There were some enjoyable characters in the story and some surprising ones that had hidden depth. The Jane Austen thread through this book was somewhat tenuous and not really a part of the main plot but it was still interesting.

Wishing I could waltz in a field of butterflies,
K


Buy What Would Jane Austen Do?