Burn This Book (Or Don't) 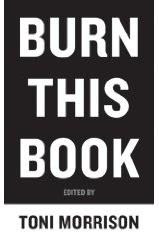 If you care about the freedom to read and write whatever you choose, you may be interested in this new book -- Burn This Book: PEN Writers Speak Out on the Power of the World. Released in May and edited by Toni Morrison, this collection fights for the rights of the author and the rights of the reader.

From the publicist:
Burn This Book was born out of a speech last April that Nobel Prize winner Toni Morrison gave at the PEN International Festival dinner. Morrison observed that night, "A writer's life and work are not a gift to mankind; they are its necessity." As she paid tribute to the difficulties and challenges writers face in many parts of the world, she also reflected on the steep price we all pay when voices are silenced. This powerful, incantatory talk sparked a notion for a book of essays that would explore the issue and impact of censorship in the world.

Published in conjunction with the PEN American Center, Toni Morrison's speech now opens this collection of extraordinary voices from around the world: John Updike (in one of his final pieces), David Grossman, Francine Prose, Pico Iyer, Russell Banks, Paul Auster, Orhan Pamuk, Salman Rushdie, Ed Park, and Nadine Gordimer. The writers represent Nobel and other prize winners and they include writers who have had first-hand experience of censorship and its consequences.

Why protect free speech? What is the power of the word? The approaches they all take to these questions are as varied as their works of literature. Here, the personal and the political mingle and collide; philosophical reflection is partnered with the conundrums of experience. Across the pages there is a rush of ideas, emotions and perspectives that disallow assumptions to stand or acquiesce to any force, whether external or internal.

About PEN:
PEN is the leading voice for literature and a major force for free expression and the unhampered exchange of ideas and opinions worldwide. Founded in 1921, it is the world's oldest ongoing human rights organization, and it currently has 144 PEN centers in 102 countries dedicated to protecting the right of all humanity to create and communicate freely. By mobilizing the world's most influential literary voiced and an international network of writers, readers, and human rights supporters, PEN makes a difference every day in the lives of writers who are facing persecution around the world. For more information about PEN, visit www.pen.org

Fighting for the freedom of books,
K


Buy Burn This Book: PEN Writers Speak Out on the Power of the Word