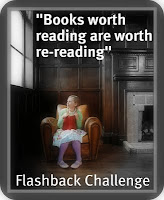 I'm co-host of the Flashback Challenge with Aarti of BOOKLUST. Since we started talking about the challenge, I have been thinking about the books I would like to re-read next year. It turns out that I am having a hard time narrowing it down so I will just make a big list here and probably edit it over the next few weeks and into the new year!

First, I really need to re-read Wicked and Son of a Witch (Gregory Maguire). I have A Lion Among Men in my TBR pile but it's been a while since I was in that world and I could use a refresher before starting in on the third novel.

I also want to re-read my Josephine Tey collection. I believe I have all that she ever wrote (eight books) and it's been a few years since I read them. With the Nicola Upson books out (the ones that feature Tey as a character), it would be nice to reacquaint myself with her style and characters.

I really want to participate in the Lord of the Rings Readalong with Eva and Teresa. It's been long enough since I last read them that I think I will get something new out of these fantastic books.

Well, that's only twenty five books! But since I'm probably going to end this year at about 150 books read, I should be able to get through most of these next year as long as I don't accept too many review books and postpone some of my ninety book TBR pile here at home. And if I have any spare reading time, I am dying to re-read my Oz books. I only own sixteen of them.