"This is the bright candlelit room where the life-timers are stored--shelf upon shelf of them ... one for every living person ..." 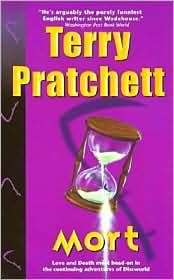 Terry Pratchett has a few "tracks" of novels in his Discworld mega-series. I read the first two Rincewind books (he's a wizard) and then decided to try the first book in the Death series, Mort. The title character is Mortimer, an awkward teen who doesn't have much to offer the world. And yet he catches the eye of one who is willing to take him on as apprentice -- Death. Mort decides to take the offer and travels with Death to his home on another plane of existence -- a home with a servant, an adopted daughter and gardens of black food and flowers. This is the story of Mort's attempts to learn the reaping trade and his realization of the depth of the consequences attached to making mistakes in the job.

I really liked this novel. Death was an interesting character in the first two Discworld books I read and I was looking forward to trying out this story line. I thought Death would feature more in this book but it really was the story of Mort. Still, it was an interesting look at what could be called "the universe's dirtiest job". Pratchett has a unique way of thinking and his invented world is rich and detailed. I'm not sure which book I will choose to read next but I'm sure that I will keep exploring Discworld.

Glad to not actually have the loneliest job in the world,
K


Support our site and buy Mort