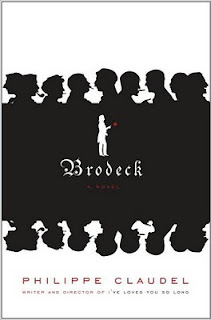 The first selection for the Not The TV Book Group was the novel Brodeck by Philippe Claudel and was selected by Lynne at Dovegreyreader Scribbles. The discussion begins today at her blog. I invite you to head over there for the summary and discussion.

Briefly, this is the story of a man (Brodeck) who has been tasked with writing an account of an atrocity that has happened in his town.  He is already scarred by having been found orphaned in the charred remains of his home town (presumably in WWI) and then dragged from his adopted home as a young man by soldiers (in a WWII scenario).  He survives to return home but finds his town changed by the occupation of the soldiers and, eventually, the arrival of a stranger in town (the Anderer) triggers a series of shameful events.  Brodeck decides that along with the official report he was asked to write (to provide justification for the town's acts), he is going to write his own story and the full version of events.  This is what we are reading in the novel.

This was a heartbreaking story that rang too true.  Though there was an assumed time frame, this story had a definite fluidity of time that gave it the ability to apply to almost any period of hatred and fear in world history. I believe that the message of the book is that emotions do not end with a conflict.  The signing of a treaty does nothing to change the evil already sown in men's hearts.  There remains a heightened awareness of those who are different and those who were ostracized.  There also remains the ability to perform horrific acts once the mental barriers to them have been brought down.

This book lends itself to much discussion so if you are interested, find a copy and head over to the discussion which will be ongoing.  It's called Brodeck in the U.S. and Brodeck's Report in the U.K.  It is translated from the author's native French.

Quiet with introspection and sadness,
K


Support our site and buy Brodeck

on Amazon or find it at your local library. We borrowed our copy from the library.
Posted by Kristen M. at 12:17 AM