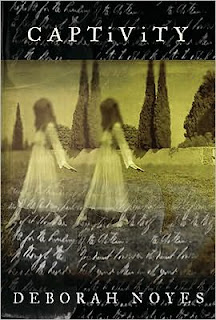 I have not been feeling very witty or wise this week due to a terrible cold (in fact, I've been asleep most of the time since Monday morning) but I've just finished Captivity by Deborah Noyes and I want to write about it sooner than later.  Novels like these remind me of why I really don't want to transport through time and live in the Victorian world.  The difficulties women faced and the constraints of propriety are enough to keep me happy in the modern world.

This novel has two interlaced stories -- one about the emergence of The Fox Sisters (non-fictional characters), famed spiritualists in New England, and the other about Clara Gill (a fictional woman), past her "prime" and paralyzed by her painful past.  Their paths intersect when the two younger Fox Sisters, Maggie and Kate, are moved to their older sister Leah's house in Rochester, New York.  This is where Clara lives with her father and Maggie temporarily cleans house and makes tea for them.  Though she never knows the truth about Clara's past, she may be the only one to help Clara come to terms with it.  The Fox Sisters' story is one of opportunity -- taking advantage of a unique talent to create the spiritualist movement and direct their own destinies.  Clara's story is one of repression, both internal and external, as she closes in on herself after succumbing to the effects of the Victorian constraints on females, youth and love.

I know that sounds a bit vague but I don't want to spoil the unfolding of these tales.  The book takes a bit of time to settle in with because Noyes also doesn't seem to want to unfold the stories too quickly, instead starting with a flighty back-and-forth between the two narratives.  But when both stories settle into their rhythms and eventually connect, this book is hard to put down.  I was bothered a bit by Noyes' refusal to reveal whether the Fox Sisters were charlatans or not (Maggie confessed later in life to faking the "rappings" of the spirits during their sittings but then recanted the confession a year later), but I understand why she chose to keep this ambiguous because this book was more about searching for what to believe in rather than finding truth.


Support our site and buy Captivity

on Amazon or find it at your local library. We received a review copy from the publisher.
Posted by Kristen M. at 12:02 AM