, I thought I would join the 21st century this year and change up the formats in which I experienced the story for the RIP Challenge this year. 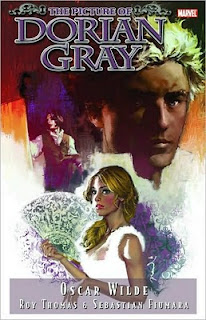 , "written" by Roy Thomas and illustrated by Sebastian Fiumara.  This is part of the Marvel Illustrated series of classics retold in graphic versions.  Lest you worry, this is from Thomas' introduction:


Since our aim was to tell Wilde's story, in the author's own words wherever possible, I was loath to put words into the mouths of his characters.

I think that Thomas definitely did a great job of this.  Wilde's humor and cynicism shows through on every page and Fiumara's skilled and reserved illustrations are a fantastic companion.  And yet, this is still a graphic novel and I had to chuckle when seeing such things as "BLAMM" and "SHUNK" in the middle of Wilde's story.  I think this would be a good introduction to the story for someone that is a bit wary of Victorian language.  It contains a four page glossary at the back of possibly unfamiliar words like brougham and pomander.  It is also lacking in Wilde's long passages of philosophy which might appeal to some readers wanting to just explore the plot of the story.  This (and others in the Marvel Illustrated series) might even be a good start for someone wanting to explore graphic novels but who is not sure how to make the leap from standard literature without landing in comic book territory. 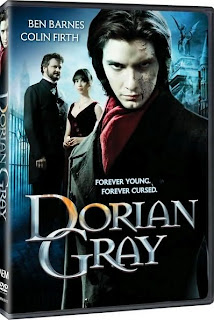 Next, I watched the recent film version of Dorian Gray which was finally released on DVD here in the U.S. a couple of weeks ago

As you could probably guess would happen, this was a ridiculously sensationalized version of the story with uncountable plot and character changes.  As always, Firth was fantastic in his role (just as wonderful as George Sanders in 1945) but Barnes just wasn't able to surpass Hurd Hatfield's amazing performance in the old film.  And the plot changes seemed unnecessary in some parts and ridiculous in others.  An added character even changed Dorian's final attempts at redemption into just another selfish act.  I was quite disappointed in this film overall.

And as a side question -- why is gratuitous violence more acceptable to film audiences than nudity?  This film is full of fight scenes and murders or attempted murders and yet barely shows any nudity, though sex was implied to be the bulk of Dorian's sins against others.  It was just incredibly unbalanced and, as I am not a fan of violent scenes, it really made me lose almost any interest in this film.  It turned the story into something it was never meant to be and was disappointing.

If this was a Book v. Movie post, I would definitely say "avoid the film but look for the graphic novel if you're into them or thinking about trying one out".

As sparkly clean on the outside as in,
K

on Amazon or find it at your local library.  We bought our own copy.
Posted by Kristen M. at 12:15 AM