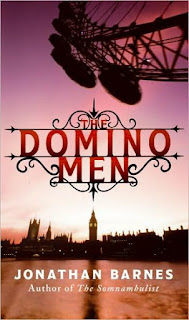 One of my favorite RIP reads last year was The Somnambulist

by Jonathan Barnes.  It was a wonderful fantasy-tinged, sensational neo-Victorian novel.  I soon bought Barnes' second novel, The Domino Men

, which is set in the same universe but later in time, specifically modern-day London.  Then, of course, I didn't read it for almost a year because I was too worried about my high expectations after the first book.  The funny thing is that I just read back through my review of The Somnambulist where I regretted not reading that novel for a year after I received it.  Ditto.

The Domino Men is mostly told from the point of view of Henry Lamb, a young man who has a dull life in a filing office after a short stint as a child actor -- complete with catchphrase that strangers make him regurgitate regularly.  However, when Henry's grandfather ends up in a coma, random people start coming out of the woodwork, requesting things of Henry that he doesn't understand.  Henry eventually gets caught up in a war between state and crown that began with Queen Victoria.  All that is at stake is the city of London and the freedom of her citizens.

This story was very far-fetched, a bit shocking and violent and quite fun!  I really enjoyed it but wouldn't recommend it to everyone.  To enjoy this book you probably have to have a dark sense of humor and an ability to suspend disbelief.  The characters aren't incredibly deep in this story but the complex plot lines more than make up for it and keep the reader invested.  Thankfully, the internet tells me that Barnes is working on a third novel.  I can't wait to see what he throws into the mix next!

More of London than just the bridge is falling down,
K


Support our site and buy The Domino Men on Amazon or find it at your local library.  We bought our own copy.