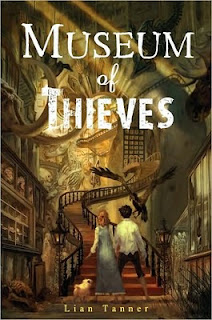 , first in The Keepers series by Lian Tanner.  Goldie lives in Jewel -- a city that is so afraid of anything bad happening to their children that they keep them on leashes until the age of eighteen and shelter them to a ridiculous point.  When Goldie (short for Golden) decides to make her escape one day, she ends up hiding in the Museum of Dunt, a magical place where all of the danger and trouble of the town has been secretly hidden.  And when corrupt leaders in the city decide to unleash the darkness in order to gain more power, it's up to Goldie and the museum keepers to stop them.

Though it took a while to become oriented in this strange and unpredictable world, this book really paid off by the end.  Goldie is a great heroine who makes a lot of difficult decisions but gets through tough times by listening to her instincts.  She isn't perfect but she is willing to learn.  And the supporting characters in the book are quite interesting as well.  The museum keepers are a unique bunch of misfits.  One small complaint was that the villains were extremely shallow characters.  But at the same time, I will admit that they made my heart leap into my throat many times.  They were quite scary!

The novel was somewhat obvious in its critique of "helicopter parenting" and I'm sure that there will be some kids who are reading it that will feel a bit of familiarity with Goldie's frustrations at never being allowed off her leash (literally).  I wonder if those overprotective parents who read this book with their children will be horrified by the dangerous situations that Goldie and Toadspit (another runaway) get into or if they will realize that children are more capable of bravery, ingenuity and strength when they are given the opportunity to develop these characteristics as they are growing up.  I know that it made me rethink the way that I am raising Z.  I certainly wasn't expecting that going into this book!

Cutting the leash (or at least lengthening it a bit),
K


Support our site and buy Museum of Thieves

on Amazon or find it at your local library.  We received an advance reader's copy from the publisher.
Posted by Kristen M. at 12:11 AM