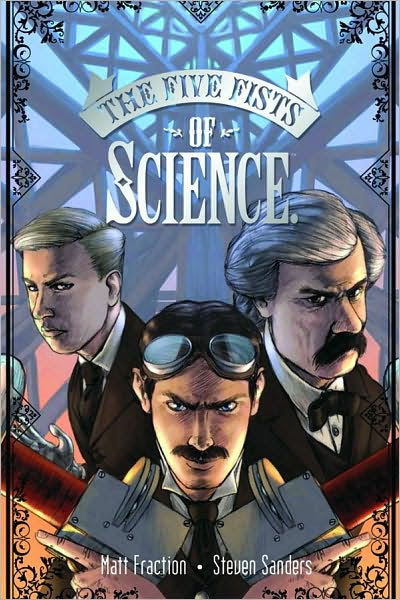 Yes, that is Nikola Tesla with two lightning-shooting guns and some stylish goggles, flanked by his assistant Tim and being goaded on by the one and only Mark Twain. The Five Fists of Science is a short graphic novel, written by Matt Fraction and drawn by Steven Sanders. With an irresistible title, this was an impulse buy at our local comic shop. And while it had some laugh-out-loud moments, cool technology and a truly wicked Thomas Edison (as we all know he is, the damn elephant murderer), I wasn't entirely sold on this one.

Pairing Tesla, Twain and the Baroness Bertha von Suttner as a team united against the evil forces of J.P. Morgan, Edison, Guglielmo Marconi and Andrew Carnegie is a fun idea. While Tesla's team believes in science (and in Twain's case, a bit of showmanship), Morgan is relying on black magic and mythical creatures to gain power. Which will win?

Some of the dialogue in this book is hilarious and some of the art is inspiring. But then there are other times when some of the dialogue is repetitive and some of the art is a bit too dark to decipher. But, with a giant robot that works like Big O and looks like the Iron Giant, there's enough to enjoy in the book to make it worth reading for fans of science and/or steampunk. A fair warning, though, there is a decent amount of profanity and some blood in the book -- and more than enough New Jersey jokes. 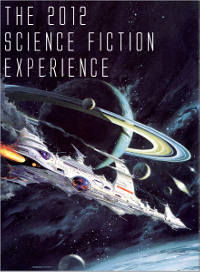 I chose to add this to my reading list at the last minute because of Carl's 2012 Science Fiction Experience. It's my first time participating which, honestly, doesn't make much sense. Usually I protest "well, I just don't read science fiction very much" but then I went to my TBR and was able to pull this right off the top of a stack. So, with this and my upcoming review of Connie Willis' Blackout and All Clear, I guess I will officially be joining this annual event. It feels nice to come out of the sci-fi closet!