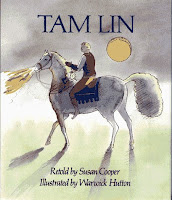 The Fire and Hemlock Read-Along discussion is at the end of next week but I thought I would write about the Tam Lin readings I've done in preparation. Then I can just discuss the tale in the context of F&H next week. I ended up reading five retellings and the original Scottish ballad and none of them were identical.

If you aren't familiar with the ballad, here is a great place where you can read Tam Lin (Child 39A version) and it has translations for the Scottish words on the side (very helpful!). The basic story is that a Scottish lass named Janet (or Jennet or Margaret) is warned away from a place called Carterhaugh --

O I forbid you, maidens all,
That wear gold in your hair,
To come or go by Carterhaugh,
For young Tam Lin is there.

She goes anyway because her father owns the land where this shadowy glen is and there she picks a rose, which summons Tam Lin (or Tamlane or Tam-a-Lin). He was once a man but then he was captured by the fairies and has lived with them for a very long time. However, they have a custom that, every seven years, they make a human sacrifice to Hell to preserve their way of life and he is the chosen one this time. It also happens though that Janet falls instantly in love with him and becomes pregnant with his child. She returns home and is shamed but defiant and so she returns to Carterhaugh. Then Tam Lin tells her that there is one way that he can be saved from sacrifice. On Halloween night, she must be there to see a procession and, when he passes, she must pull him from his horse and hold on tight. The fairy queen will change him into all sorts of terrifying animals and finally a burning torch. If Janet persists and then dunks the torch in the well, her love will be human again (and naked). All goes to plan and the fairy queen is angry but defeated and Tam Lin and Janet can be together.

First, on a nice sunny day, I sat on the front porch and read the picture book versions from Susan Cooper (illustrated by Warwick Hutton) and Jane Yolen (illustrated by Charles Mikolaycak) and a brief version in Barbara Ker Wilson's Stories from Scotland. They covered a wide range of variations on the story. The Susan Cooper version added in more backstory for the heroine. The Jane Yolen version added a castle in Carterhaugh. But I certainly came away from these three retellings with some basic thoughts on the ballad --

One, the female is the heroine of the tale. She not only brashly sets off to a forbidden land, but she bravely deals with an out-of-wedlock pregnancy and holds her ground when confronted with all of the terrors and physical pain that the fairy queen sends her way.

Two, this is definitely a ballad full of symbolism -- from the roses to the serpent that Tam Lin briefly becomes.

Three, the only part that nobody seems to want to change in the stories (or the illustrations) is that Tam Lin was naked after all of the transformations. 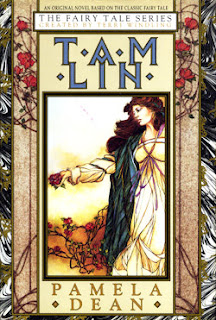 Next, I read Pamela Dean's Tam Lin, the only book I initially intended to read before F&H. I know it's a favorite for many but I was kind of disappointed with it. It's a 450 page book and the actual Tam Lin part is only in the last 50 pages. The rest was a play-by-play of Janet Carter's time at a small liberal arts college in Minnesota. Having to sit through discussions about which classes to take next term, classroom discussions about literature I haven't read and Janet's constant bitching and eye-rolling about every person on campus was a bit tiring. I was not an English major in college so maybe that would have made a difference. Maybe I could have related to the story more. But Janet's ineptitude in the one physics lab she took just made me roll my eyes because it was so stereotypical. I was also a little put off by how Dean had to point out everyone's race and color so often. And, honestly, the diversity at the college seemed a bit unlikely for the Midwest in the 1970s. I am not sure about that though. It was interesting to read about the first birth control pills and their awful side effects. My mother-in-law tells me horror stories about them every once in a while.

If you're interested in reading this book, I suggest going and reading other blogger's thoughts on it (good and bad) -- here are some from Jenny, Rhinoa, Ana and Heather. 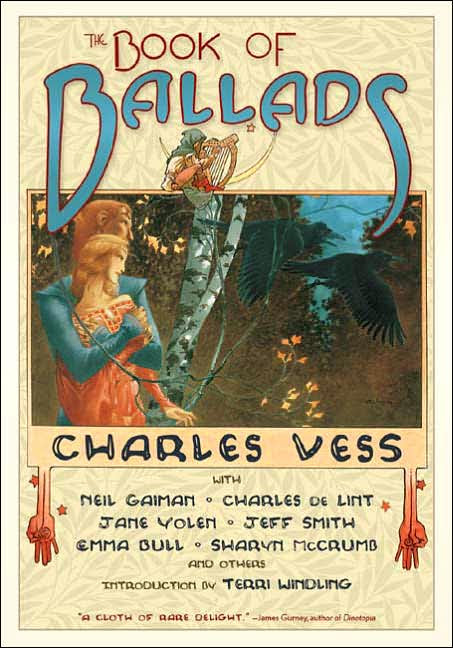 Finally, I ended with the version of Tam Lin put forth by Elaine Lee and illustrated by Charles Vess in the beautiful Book of Ballads. This one was WAY out there, making Tam Lin's rescue more of a spiritual one as his soul went into Janet's unborn baby and he was saved by being born to his own lover (naked, of course). I assume then that all of the pain and monsters were actually labor and childbirth. By the way, this is not a volume to share with your children if you don't want them seeing a high level of nudity and anguish.

Now that I have a firm grasp on Tam Lin, I will continue with Thomas the Rhymer (in Stories from Scotland, The Book of Ballads and Ellen Kushner's novel). Hopefully I'll get all of that done before the read-a-thon on Saturday because I'd really like to read F&H then!

(And this reading all obviously qualifies for the Once Upon a Time Challenge.)