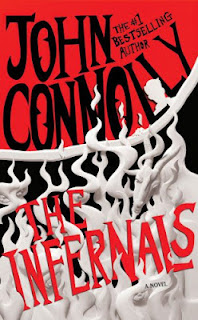 Though there are only two books in John Connolly's Samuel Johnson Tales so far, I think that it's one of my favorite series ever. And, before I go on, The Gates and The Infernals (Hell's Bells in the U.K.) are listed in some places as YA books, but I'm not convinced that they really are except for having a young protagonist. In my review of The Gates from two years ago, I apparently took issue with this same YA labeling so at least I'm consistent.

With copious (hilarious) footnotes about science and religion, this story picks up soon after the first when scientists are about to do the same thing again that caused demons to be able to cross over to our realm because, well, they never learn ... or they always want to learn or something like that. And, as in the first tale, poor little Samuel Johnson is about to be caught up in the middle of it all. But this time, he gets pulled through into Aitch-Eee-Double-Hockey-Sticks and, with the help of his trusty dachshund Boswell and some other unwitting travelers, he's going to have to stop the domination of the world by the forces of evil all over again.

I'm not kidding when I mention hilarity. I decided to start this book the night before Read-a-Thon so that I wasn't starting fresh on a book first thing in the morning and, just during the first chapter, I laughed out loud twice and the husband made the mistake of asking what was so funny and then had to sit while I recited a footnote out of context which I still found funny but him ... not so much. Now, if you're not a fan of Douglas Adams or Monty Python or Terry Pratchett, you probably won't find this book as side-splitting as I did. But if you like your humor dark and British (insert Idris Elba joke here -- side note, did you hear he could possibly be the next James Bond?!), you'll likely adore these books as well.