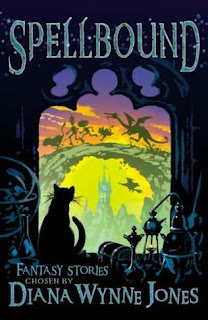 It turns out that the first book I finished for Diana Wynne Jones Month wasn't even written by her except for one short story at the end. It was Spellbound, a selection of fantasy tales "chosen by Diana" that I picked up at Half Price Books a couple of years ago simply because her name was on it. With eighteen short stories or excerpts of books from Rudyard Kipling, Eva Ibbotson, L. Frank Baum, E. Nesbit, Tove Janssen, Patricia C. Wrede, Joan Aiken and more, these stories were apparently chosen by Diana as the best of fantasy (in her opinion, of course). Unfortunately, there is no foreword or afterword talking about why she chose these particular stories, although one gets the gist of it after a while. As you read, you start seeing echoes of Howl's Moving Castle and Castle in the Sky and The Ogre Downstairs and Witch's Business and so many more of her stories and you realize that Diana's broad selection of fantasy tales were all written because they were subjects and ideas that she loved. Diana's story in this collection, "What the Cat Told Me" seems to bear the seeds of Earwig and the Witch and I loved it.

I didn't think there was a dud in the bunch (well, maybe that one based on Spenser's The Faerie Queene) except for the poor production quality of the book. It has a gorgeous cover and nice paper and, well, extra sentences and also some missing ones. For some reason, in more than one place in the book, one or two sentences are repeated. It's confusing the first time it happens and annoying the next few times. As for the missing paragraph or possibly page, that was really unfortunate. If this book had better editing and an informative foreword, I would recommend it unreservedly. My TBR has once again grown by leaps and bounds. I finally found out who the Moomins are, I immediately wanted to re-read The Silver Chair, I decided on Which Witch? for Z and my RIP read-aloud this year and I've lamented never reading Five Children and It.

There is one personal statement from Diana at the start of the excerpt from The Seven Towers by Patricia C. Wrede --


I know it is annoying to be given only the start of a story, but it is a long book and I did want to introduce you to my favorite sorceress. Here she is at her most typical.

If that isn't reason enough to pick up Wrede's book immediately, I don't know what is.

So, if you want an insight into Diana's taste in fantasy (though you likely already know it from her own work) and don't mind some wonky editing, see if you can find a copy of this book.

Learning more from my favorite witch,
K
Posted by Kristen M. at 12:13 AM