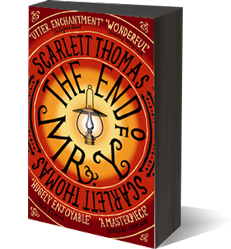 I have to admit that I bought The End of Mr. Y by Scarlett Thomas without knowing anything about it. I had heard the title and the book is pretty with its black edges and, well, it was cheap at Half Price Books. So, when I thought that it would be a good RIP read, I really didn't know for sure but I was hoping for a perilous read. As I started reading it, I also began second-guessing my choice -- that is, until it became more perilous than one could ever imagine.

I don't want to give too much away about the plot so I'll just say that it's about a Victorian book that has the ability to fuel a very dangerous obsession. There's a lot of philosophy in it and sometimes I felt like it was a little too weird but, by the end, I was impressed with the direction that Thomas took. I'm definitely going to look for more of her books because of the unique ideas in this one. 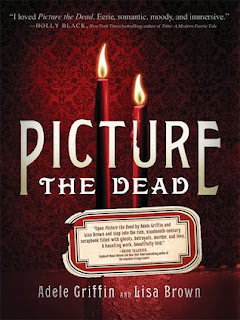 At our Scholastic book fair last year, I picked up a copy of Picture the Dead by Adele Griffin and Lisa Brown. I thought this story had its ups and downs. It's a Civil War era story with ghosts and spirit photographs and love and betrayal. The story was a overly dramatic in parts but nicely historical in others. I think this is one case where I might be too old for the book. If I had read it as an eleven or twelve year old, I probably would have loved it.

Traveling from one end to another,
K
Posted by Kristen M. at 12:06 AM