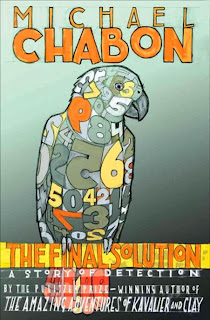 Some of us are thinking about Sherlock Holmes more than is perhaps seemly these days and so it seemed a good time to finally grab this very short novella, The Final Solution: A Story of Detection, off my shelves. I should have known after prior experience that Michael Chabon would pen a story both emotional and intelligent, this being the tale of the unnamed detective's decline into being, well, simply something less than he once was.

Though his name is never spoken, our elderly recluse with a stellar reputation and a penchant for bees is obviously none other than Sherlock Holmes. And when he is asked to look into a murder and the disappearance of a beloved bird, he attempts to step back into his well-accustomed role. And while it's true that he is still more capable than most anyone else, he also starts to experience the new limitations of his body and mind.

This was such a beautiful meditation on Holmes and his legacy and his inevitable decline. One can only muse on what it would be like to lose even a touch of one's genius to the aging process. It almost makes one understand why Holmes would choose to die young if given the chance (or would he?).

Unraveling the mystery of identity,
K
Posted by Kristen M. at 1:34 AM