New Release: The Girl Who Soared Over Fairyland and Cut the Moon in Two 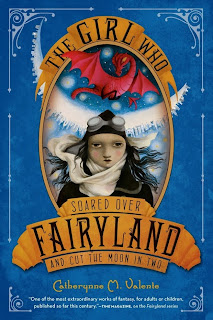 Third of the Girl Who books, The Girl Who Soared Over Fairyland and Cut the Moon in Two by Catherynne M. Valente is a beautiful sequel in a beautiful series though, admittedly, is not quite the strongest of the bunch. Though it has some of the most touching and emotional scenes so far, it also has a bit of trouble staying within the story. Sometimes it briefly lost my attention as Valente also seemed to get a little lost in her own flowery prose and turned away from the characters. Still, even the least-perfect entry in this series is a book well worth reading and sharing (and thankfully sets the scene for book four!).

As I don't want to spoil the plot of the story at all, instead I'll share with you an example of Valente's unique writing --


And so September tried to put an expression of a very proud, noble, solemn adultish sort of wonder on her face, because it was a trick she felt she ought to learn. But that is a lot to contain in two eyes, a nose, and a mouth, and she really only managed her own unhidable leaping, fizzing joy--yet this time the joy was a silent one. It jangled inside her but did not boil over. To be back in Fairyland. To be near magic and thrillingness again. To be in a place where she did not have to lie about the things she wanted most of all--because they were here, and she could touch them and talk with them and wrestle with them and ride upon them.

If you haven't started this series yet (with The Girl Who Circumnavigated Fairyland in a Ship of Her Own Making), you're missing out on a truly wonderful story. There is a novella from 2011 on Tor.com, The Girl Who Ruled Fairyland -- For a Little While, which is set in the past of this world -- if you need to take this tale for a test drive.

Also managing only unhidable joy,
K
Posted by Kristen M. at 1:40 AM