New Release: The Ghost in the Electric Blue Suit 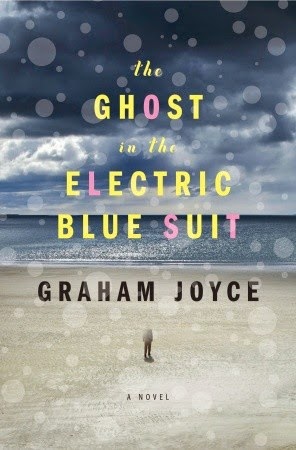 Graham Joyce's The Ghost in the Electric Blue Suit begins by introducing us to college student David Barwise, who has just arrived at a seaside resort in 1976 Skegness to start a summer job. He's ended up there because it's the location of the only photo he has of his father. He doesn't know much else about the man who died years ago but he has a strange notion that the answers are in Skegness. He ends up finding a lot more than he bargained for there -- unconventional relationships, ladybugs and a ghost in an electric blue suit.

Powell's has created a pretty cool companion playlist for the book. I wish I had found it before I read the story so that I could have listened along to Lou Reed, Patti Smith, Kate Bush and more while I journeyed with David through a summer of varied co-workers, vacationers and leisure activities. Even though it turned out to be a different type of story from what I would normally read, I still enjoyed it quite a bit. It took me to a time and place that I've never visited before, introduced me to people I wouldn't have met otherwise and made me think about memory and the past in a different way. The crafting of the story was superb, even in the most uncomfortable moments of David's summer.

I definitely want to read something else by Graham Joyce. Any suggestions?

p.s. I received a copy of this book to review from the publisher.
Posted by Kristen M. at 12:50 AM