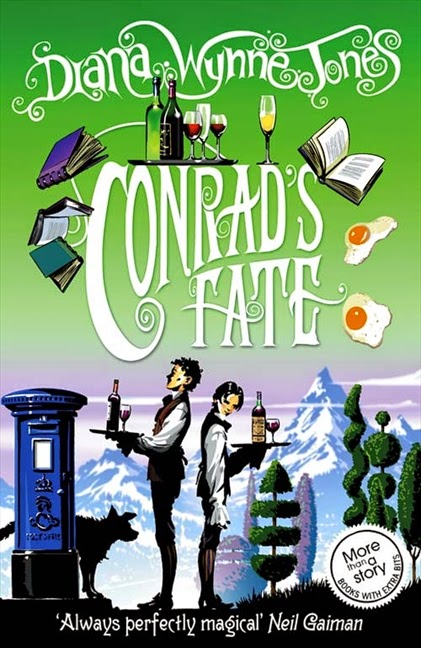 I didn't mean to read Conrad's Fate this year but, since it's in a single volume with The Pinhoe Egg and it comes first, well ... I couldn't resist!

Conrad Tesdinic lives with his mother, sister Anthea, and Uncle Alfred above the family-run bookshop in Stallchester. Conrad's uncle has revealed to him that he has a black Fate based on bad karma. His only chance at clearing his Fate is to find the person he was supposed to kill in his previous life and do the deed in this one. To do this, he must first get a job at the large estate above the town. But, as fate would have it, Conrad "Grant" runs into Christopher Smith (a.k.a. Chant) on his way to Stallery and nothing goes as planned.

I adore this story. It's complex and funny and exciting and, best of all, it's got a teenaged Christopher Chant! I tried focusing on the female characters in the story as I was reading but they were really rarely mentioned -- and when they were, the things that were said were almost universally not great. There are two mothers and they are both pretty bad. There is a sister who can't be faulted for looking after herself but she really should have done more for her brother. There are bossy housekeeper-type women, one of whom has a drinking problem. There's Millie who only shows up intermittently. And then there are two witches, one horrid in a horrible way and another horrid in a glamorous way. This story really isn't very kind to women. Luckily, I'll have my next read to balance that out.

So what is that magical story with a bold and brave female protagonist? The Islands of Chaldea! The read-along discussion post goes up on the 17th so grab your copy if you haven't read it already.

Falling under the spell again,
K
Posted by Kristen M. at 12:12 AM