In an effort to clear my TBR bookcase more quickly, I, of course, picked up a few of the chapter books that I had sitting around. 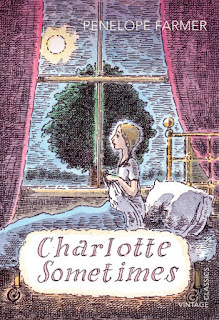 I mentioned Charlotte Sometimes by Penelope Farmer in my RMODB post last month but I wanted to sing its praises one more time.

Charlotte heads off to boarding school and, as she is first in the dormitory, she gets her pick of beds. She decides on the one with the fancy wheels by the window and thus begins an unbelievable adventure. Every other morning, she wakes up forty years in the past, during the First World War, in the body of a girl named Clare.

Once again I am going to lament that my suburban Southern California library didn't have a selection of British children's fiction for me to fall in love with when I was a kid. I don't know what last prompted this complaint but it might have been Tom's Midnight Garden or The Children of Green Knowe. These are all books that would have stretched my imagination and started my Anglophilia early. 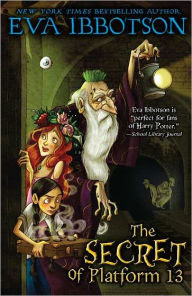 There are a lot of similarities between Eva Ibbotson's children's fantasies and they are, coincidentally, the things that make me love them the most -- a strong respect for nature, a distaste for spoiled, thoughtless people, and a belief in secret creatures. The Secret of Platform 13 is a simple story about an abducted fantasy-land prince and the attempt by a motley crew to rescue him from the horrid London home of an early version of the Dursleys.

Ibbotson's books aren't the most complex but they are possibly the most thoughtful. I fall in love with her a little bit more with each sweet tale. 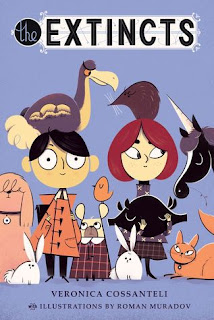 This one wasn't technically on my TBR because it was an ARE but it was sitting unread in my house and so it eventually had to be read, right? The Extincts by Veronica Cossanteli delivers just what it says in the title, a whole bunch of amazing, supposedly extinct or very mythological creatures on a secret farm. George gets a job at Wormestall Farm and also makes a new friend -- Prudence, whose evil stepmother is an evil taxidermist who would love to get her horrid, evil hands onto the special creatures (to murder them and stuff them).

This was a crazy, fun story! The creatures were AMAZING and Prudence's mother was a terrifying villain. And did I mention the creatures? Because now I really want a farm with some lovely aurochs, a unicorn, a couple of dodos, and maybe even an ichthyosaur in the pond. I'll skip the toilet kraken though! (See, now you have to read it to find out about that ...)

Did you read any fun chapter books this summer?

Craving time travel and dodos,
K
Posted by Kristen M. at 1:09 AM