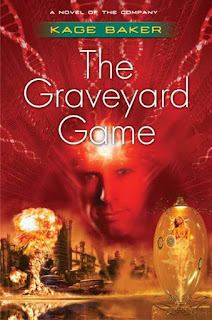 My third RIP read is the fourth novel in Kage Baker's The Company series. The first three books have fairly standard mishaps and perils as the immortal cyborgs that work throughout time for the company called Dr. Zeus (collecting artwork, literature, historical artifacts, animal, and plant species that would otherwise have been lost in time) interact with humans and each other. This book, though, reveals a couple of major conspiracies and also takes us into our future, a time that is not pleasant in many parts of the world. I found it very hard to read right now, as we too have a very uncertain future. Mention of a second U.S. Civil War never seemed like such a threat as it does right now. And targeted pandemics in a time of such open and unrepentant racism seem just as likely. I truly hope that Baker's bleak visions of the future end up to be nothing more than science fiction after all.

If you're interested in starting this series, there's a great recent post by rocalisa that lists all of the books, novellas, and short stories by publication date (and also includes where to find them, which can be tough these days -- many Kage Baker books are out of print). There's also a big reread going on at tor.com and they're only in the middle of the third book so you could easily start and read the posts that are already up!