#RIPXII 2: The Meaning of Night 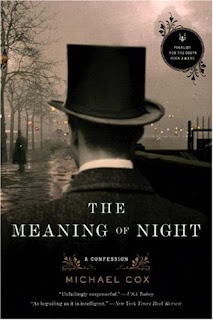 I didn't waste any time getting to my reread of Michael Cox's The Meaning of Night this RIP season. I read this book near when it came out in 2006, a couple of years before I started blogging, so all I really had in the old noggin were memories of super-enthusiastic feelings. I was quite nervous in case the book didn't live up to those.

The story follows Edward Glyver as he tries to regain a birthright that he was kept from as a child and to get revenge for wrongs done to him as a youth. He fights against Phoebus Daunt, a poet and scoundrel, who is attempting to con his way into that birthright and into the heart of Emily, the same woman who Edward has fallen in love with. I know that sounds a bit stodgy and, well, Victorian, but that's because I didn't share the first line yet --

After killing the red-haired man, I took myself off to Quinn's for an oyster supper.

Yes, Glyver lets us know from the first sentence that he is a murderer. And, from there, the story continued to keep my attention. It was smart and twisty and made great use of Cox's extensive knowledge of history and literature. I'm so glad that I reread it and it has re-whetted my appetite for Wilkie Collins and the other Victorian sensationalists. Not all books need supernatural villains, for there's truly nothing so scary as the evil men do.