A Little More About Us 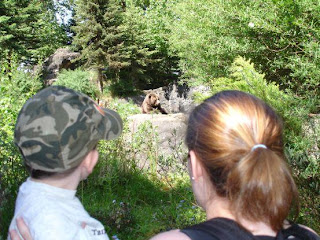 Now that we've been here for a little bit and there might be one or two people paying attention, I thought I should share a little more about us. This is us at the zoo in Seattle. We both have a strong love for animals. I have a Bachelor's degree in zoology and I guess I may have stacked the odds a bit for Z by having so many animal related books and other things around the house. Z is silly because he loves every animal except for our two cats. He mostly tries to pretend they don't exist.

My dad was in the Army when I was little and I spent most of the time until I was six in Hawaii and then we moved to southern California for the rest of my childhood. And a random fact ... I'm sixth generation Californian. Totally, dude. Actually I have to make a conscious effort to remove "dude" from my speech most of the time. What else? I'm known to be pretty amusing -- I crack T up all of the time. Also, I have five younger siblings and I was raised LDS (Mormon). I'm no longer in California and I'm no longer Mormon (no hard feelings). I've lived in Washington for over ten years now with T and the thing we are looking forward to the most is to start traveling around the world with Z.

Z is still little and he's lived in the same house all his life -- lucky kid! He goes to preschool and he's an awesome singer. This summer he has asked for the following: a trip to the beach to build sandcastles, a trip to the circus and a violin.