"My father's family name being Pirrip, and my Christian name being Philip, my infant tongue could make of both names nothing longer or more explicit than Pip." 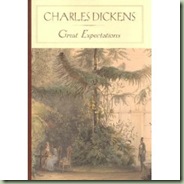 Since I recently re-read this book, let's talk about Charles Dickens' Great Expectations.  I can't remember exactly when I first read this book but I think it was around 1994, when I was in college.

The story starts with a young boy named Pip, out for a stroll on the murky, misty marsh when he is suddenly set upon by the convict Magwitch who has escaped from a local prison boat.  In fear for his life, he gets the convict a metal file for his leg irons and some food and that is the last he hears of him.  Pip continues to grow and by-the-by meets and becomes a regular in the home of a local spinster, Miss Havisham and her ward, Estella.

When Pip comes of a certain age, he finds out that he has been financially provided for so that he can move to London and become a "gentleman".  He assumes that this gift is from Miss Havisham but has been expressly forbidden to ask about it by his lawyer.  Pip spends years in London, learning to be a gentleman and pining over Estella, whom he fell in love with in his youth.  The story continues on through Pip's maturity into adulthood and the resolution of his various relationships.

I have always liked the characters in the book, especially Pip and Miss Havisham.  They are believable and well written in their various voices.  The story never feels forced even when some parts of it are in the realm of the fantastic.  The descriptions of the various parts of England are vivid.  This book is good on so many levels that it's really worth a read.  Some people have a fear of Dickens but I think it unfounded.  He has a sense of humor and a real appreciation for all levels of society.

Do you love or hate this book?  Please join in!