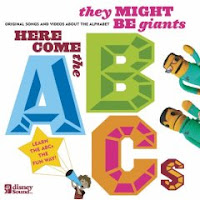 One of our favorite things that did a great job of getting Z interested in letters and words is the fantastic They Might Be Giants' Here Come the ABCs video and cd. T and I were fans of TMBG in our younger days (and still are -- don't despair John and John!) so when we saw that they were putting out an ABCs album for the little ones, we were psyched! I think Z was about 18 months old when it came out so he was just about ready for some ABCs and we were in the market for kid music that wouldn't make us stick our fingers through our ears into our brains.

With such awesome tracks as "Go for G", "Pictures of Pandas Painting" and "Alphabet Lost and Found", there's something for everyone. As with all of They Might Be Giants' music, there's a lot of variety in the sounds and styles of each song so it doesn't get as tedious as some other sing-songy kids' music. And the best part is that it lets the young ones learn that letters and words are exciting -- and boy, are they!

Rocking to the ABCs,
K and Z

p.s. if you like this one, don't miss their second outing Here Come the 123s. It's math-tastic!

on Amazon or find them at your local video store.
Posted by Kristen M. at 12:08 AM