"I was down in Surrey, on business for Lord Cromwell's office, when the summons came." 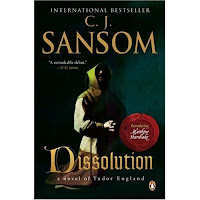 A few months ago, I had been recommended C.J. Sansom's Dissolution based on other books I have read. I finally got around to reading this mystery set in the time of Henry VIII and I enjoyed it. The first in a series featuring the hunchback lawyer, Dr. Matthew Shardlake, this was also Sansom's first novel. Unlike some other first novels I have read lately, I thought that this one was well put together with a good plot and tone. It was a little slow-going to start and didn't really have much build-up until the very end but it was still engaging and interesting.

The topic is the dissolution of the British monasteries after the rise of the Church of England. This particular Benedictine monastery happens to be the site of the murder of a government official and Shardlake is sent to investigate. I would definitely consider reading at least the next book in this series. This isn't a time period that I have read a lot about so I feel like there is more to learn from Sansom.