"I wish you, first of all, to imagine that you are standing beside me, peeping over the rail of an arched and curtained gallery ..." 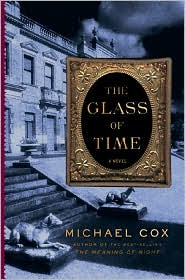 I finally got to read The Glass of Time over the past couple of days and I finished at 3:30 this morning! This book was all that I hoped it would be and more. As a sequel to The Meaning of Night it is fantastic. I was worried that it would have the same tone and be too similar but it was a different kind of book. Michael Cox has successfully written in the two styles that I have noticed in Wilkie Collins' work. In one style, nothing is known to the reader and we are constantly blind-sided by revelations both shocking and unexpected -- examples from Collins are The Woman in White and The Moonstone. In the other style, we are more omniscient and we watch the characters discover what we already know yet there is still some mystery in what the consequences will turn out to be -- Collins used this method in Armadale and No Name.

The Meaning of Night followed Edward Glyver as he tried to regain a birthright (that of Lord Tansor of Evenwood) that he was kept from as a child. He falls in love with Emily Carteret, a distant relative of the same family, and fights against Phoebus Daunt, a poet and scoundrel, who is attempting to con his way into being adopted into the birthright. The Glass of Time happens twenty years later, when the orphan Esperanza Gorst is sent to be a lady's maid to Emily, who is now Lady Tansor, heir of the birthright. Esperanza doesn't know why this path has been chosen for her but her task and her history are revealed to her over time by her guardian and she also does some sleuthing of her own to discover her destiny. I really don't want to give too much away because these books are so fantastic in revealing the right amount of information at the right time. I think that this book also gives enough information that it works as a standalone book as well. However, I strongly suggest reading them together as it will be a much more fulfilling experience.

This is my third book for the 2nds Challenge and I would read anything else Michael Cox writes in future, if he is able -- he has had severe health issues over the past few years. In fact, I would like to read his biography of M.R. James, an early 20th Century ghost-story writer.

Wishing to travel to Evenwood,
K


Buy The Meaning of Night

and The Glass of Time

on Amazon or find them at your local library.
Posted by Kristen M. at 4:05 PM