"Lyra and her daemon moved through the darkening hall ..." 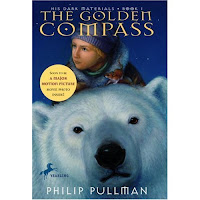 I have always been curious about Philip Pullman's His Dark Materials trilogy so when I was at the library this past week I picked up the first book - The Golden Compass. We actually watched this movie a few months ago so I was familiar with the story but wanted to see how the book differed. I was surprised to see that the movie followed the book quite closely. There wasn't much that was left out or changed -- much different from, say, a Harry Potter movie. I think the movie didn't have a strong box office take so it's uncertain if they will be continuing the trilogy.

For anyone completely unfamiliar with this series, the series name "His Dark Materials" is taken from Milton's Paradise Lost and refers to the matter used to create the universe. The first book, The Golden Compass, tells the story of Lyra, a young girl who slowly heads toward her destiny. We aren't sure what this destiny is and we are told that she must not know either because she has to enter into it blindly. This book is set in an alternate reality where each person is accompanied by a daemon -- an animal shape that is essentially the person's soul. The daemon of a child is able to change shapes and then it chooses a form at puberty and becomes a representative of the nature of the adult.

Lyra, an orphan, grows up at a college in Oxford and has a relatively uneventful life until the day that she chooses to eavesdrop during a meeting of the university Scholars and her Uncle Asriel. There she learns information that will lead her to discover not only things about the world but also about herself. She eventually leaves the school in the company of the mysterious Mrs. Coulter and begins the journey toward her destiny.

This is a hard book to summarize without giving anything away because it is like a flower, slowly opening and unfolding. I really enjoyed it and will be picking up the other two books in the series immediately. The next book, The Subtle Knife, is set in the alternate universe and also our own so I am interested to see how that is done.

on Amazon or find it at your local library.
Posted by Kristen M. at 12:17 AM

Email ThisBlogThis!Share to TwitterShare to FacebookShare to Pinterest
Labels: fantasy, his dark materials, YA fiction