"All children, except one, grow up."

I'm sure that this first line has given away that I decided to read J.M. Barrie's Peter Pan. I realized recently that I had only ever known the Disney version and I wanted to read the original. Of course, this wasn't the original play written in 1904. In 1911, Barrie re-wrote the story into a novel.

The first thing I noticed about this book was the storytelling tone. You could imagine J.M. Barrie sitting there in front of a circle of young boys telling them this tale. It was delightfully uneven and conspiratorial. The next thing I noticed was that Disney had sanitized all of the violence out of this story. Not to put too fine a point on it, Peter Pan is a murderer. He kills pirates and Indians and feels no remorse. In fact, he forgets that the fallen ever existed. This is quite different from my happy-go-lucky image of Peter. He really is a "lost boy". But at the same time, this story reminds us that children have rich imaginations and should be allowed to explore and experience life.

I definitely think that this story is worth a read the way that Barrie intended it. But I will also say that I prefer the Disney version -- and not only because that is what Z has dressed up as for Halloween the past two years! 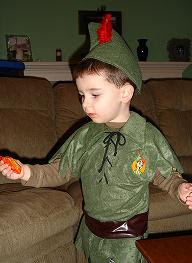 Pleased to be the mother,
K