"Raisa Ivanovna Meyer was sitting on the veranda of a rented dacha, listening to distant music ..." 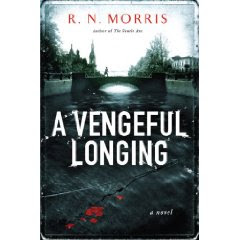 I had been eagerly waiting to read A Vengeful Longing, the sequel to R.N. Morris' first novel, The Gentle Axe. This was my final book for the 2nds Challenge -- reading authors by whom you have only read one book before. I cheated a bit, seeing as how I would have read this one anyway. It is a fantastic mystery series in an important time in Russian history.
The detective is Porfiry Petrovich, an investigator transplanted from Dostoyevsky's Crime and Punishment. He is a seasoned veteran and is known for his original methods, including the use of a rudimentary version of criminal psychology. He is joined in this story by a protege, a young man named Pavel Pavlovich Virginsky, whom we met in the first story when he was the suspect in a murder. In this story we follow a series of seemingly unrelated murders and we also witness the initiation of Pavel Pavlovich into his new profession. As in Morris' first book -- which thankfully didn't have any of the failings of other authors' first books -- the descriptions of Czarist Russia are vivid and inviting, sometimes in a revolting sort of way. It is no surprise that Porfiry must follow leads into some of the seamiest areas of St. Petersburg and, as we journey with him, one can almost smell the foul odors, see the crumbling buildings and witness the sad, vacant looks of those who have given up expecting anything from life.

This is a great mystery that offers some clues along the way so that the reader can participate in the investigation. Of course, Porfiry is methodical and still brilliant so most of the pleasure of the book is in reading how he chooses to go about the solving of the crimes. Morris is a very good writer and I hope that in addition to continuing this series, that he will try his hand at some other subjects.