"Storm clouds raced over the barren plain between the fortifications and the goods station... where the scrubby grass smelled unpleasantly of sewers." 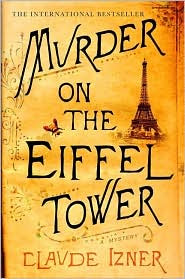 I really wanted to like Murder on the Eiffel Tower by Claude Izner, the pen-name for two Parisian sisters. I wanted to wait for more books in the series to be translated. I wanted to find a new detective. But Victor Legris is no detective and honestly is barely tolerable as a man.

The story begins with a seemingly random murder in a trainyard and continues to a murder on the Eiffel Tower during the 1889 World Exposition. Victor Legris is a peripheral character, a bookseller, who becomes entangled in the murders when he sees links between them and his new love interest, Tasha, and his mentor and father-figure, Kenji Mori. Victor doesn't know who to trust and alternates between trying to rule out his friends as suspects and believing that they are cold-blooded murders.

Legris is a rude, arrogant, self-centered twenty-nine year old man. He treats his friends badly when it suits him and he frequently walks away during the middle of conversations. He never really looks for answers -- he is too busy chasing skirt. The only reason he has any success in finding clues is that he happens upon them. He never once logically thinks things out and never takes a moment to evaluate what he already knows. It was hard to get through this book as I did not find myself sympathetic with any of the characters -- except maybe for the Senegalese man Samba, a worker at the Expo.

I don't know if I would pick up the next book in the series. There is a chance that I would read it based on curiosity as to how Victor can become the lead in a "detective" series. But part of me is afraid of reading more of what I did in this book.