The Wait for Jingle Bells Is Over! 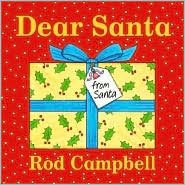 This past weekend we hit the Christmas/Winter section at the library. We brought home three cute books.

Z is old enough to be done with board books but he still loves them so first we picked Dear Santa by Rod Campbell, the author/illustrator of another family favorite, Dear Zoo. In this book, Santa is trying to choose the right present for the kid author. This is an open-the-flap book so we get to open each present as Santa decides that one is too small, one is too big, one is too messy, etc. Go get this book and see what he ends up with! 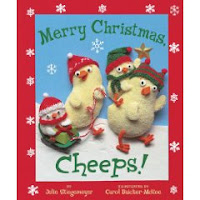 The next book that caught Z's fancy was the bright and happy Merry Christmas, Cheeps! This book is written by Julie Stiegemeyer and illustrated by Carol Baicker-McKee, although "illustrated" is a misnomer. This book consists of photographs of cloth and clay crafts. The chickies are made of terry cloth and the surroundings seem to be modeling clay. The chicks have little knitted scarfs and hats and clay beaks. They are really quite cute! The words in the book are simple but catchy and there is a really simple cookie recipe too. This book covers all the important holiday traditions -- snow angels, singing carols, making cookies and reading! There appears to be a series of these Cheeps books so maybe we will find another one later. 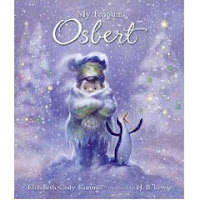 The last book we found is My Penguin Osbert, written by Elizabeth Cody Kimmel and illustrated in beautiful pencil drawings by H.B. Lewis. The young subject, Joe, tells us how he hasn't gotten exactly what he thought he was asking Santa for in the past. He asked for a racecar and got one -- a toy model. He wanted a trampoline but got a pogo stick. So this year Joe was more specific in asking for a real live penguin and he got one! Osbert turned out to be a handful but Joe didn't complain because he had asked specifically for this gift. Joe writes to Santa again saying that if maybe Santa knows better than him, he could replace the present with what he should have received. So Santa sends some tickets to the zoo and when they are there, Osbert decides to stay with the other penguins. Joe is sad to have lost his friend but he can always visit at the zoo. This is a beautiful book with a good message.

Hoping we can make snow angels sooner than later,
K and Z

and My Penguin Osbert

on Amazon or find them at your local library.
Posted by Kristen M. at 12:03 AM