A Brief History of Spelling 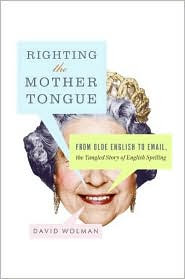 I am a speller. I just "get it" and always have. The first word I missed on a spelling test was in junior high and it was a classmate's last name (not a real word, if you ask me!). When I was in an elementary school spelling bee, my fourth grade self came in third to two sixth graders. I catch every typo on television, in books and anywhere else there are words. I feel that the ability to spell is as innate as athletic prowess or musical talent.

David Wolman's Righting the Mother Tongue: From Olde English to Email, the Tangled Story of English Spelling is the history of spelling from the very early creation of the English language to modern day. This book is equally interesting for those who love spelling and those who hate it. It includes a brief history of printing, dictionaries and spell-check. We hear about those who have campaigned for phonetic spellings and those who wanted to remove evil French and Greek influences from the language. There is even a discussion of the modern effect of text messaging on the language. This book is not very long so nothing is too in-depth, just right for a general history for anyone mildly interested in this topic.

After finishing this book, my question for you is this: do you spell-check? My theory is that there are three types of people -- those who spell-check, those who don't because they don't "need" to and those who don't because they don't care if they are right or wrong as long as they are getting their point across. I fall in the middle category. I am such an avid proofreader that I never run spell-check. I'm so ridiculously mental that I reread each post three to five times before I hit Publish Post.


Buy Righting the Mother Tongue: From Olde English to Email, the Tangled Story of English Spelling

Email ThisBlogThis!Share to TwitterShare to FacebookShare to Pinterest
Labels: non-fiction