"The fog crept in at four o'clock." 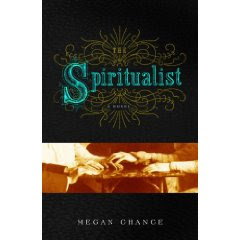 My reading list of late is full of books set in Victorian times. My most recent read, The Spiritualist by Megan Chance, is set in New York in 1856. It's a murder mystery involving an "upper ten" family, a New Orleans spiritualist and a host of upper and lower class characters. This story was engaging and well-written but I was a bit annoyed by the plot. After a short while, I started wondering if she was going to take the predictable route as to whom the murderer would turn out to be and I was right. I won't go into details and spoil the plot for future readers but if you have read this, let me know if you felt the same way.

This was still an enjoyable book despite the necessity to shout "I knew it!" and I have read some good reviews of An Inconvenient Wife so I will definitely read that at some point.


Buy The Spiritualist: A Novel

on Amazon or find it at your local library.
Posted by Kristen M. at 1:15 AM