Book v. Movie: By the Pricking of My Thumbs 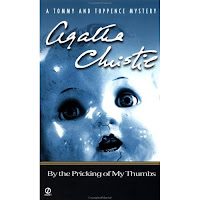 Agatha Christie's shortest series is the five book Tommy and Tuppence series. The fourth book is By the Pricking of My Thumbs, when Tommy and Tuppence are nearing retirement age. I had this book sitting on my TBR shelf and then I happened to see a tv movie version was showing on CBC. I recorded the movie and read the book first. I wish I had stopped there.

In the book, Tommy and Tuppence go to visit Tommy's elderly aunt in a rest home and Tuppence ends up talking to a batty old woman who talks about a dead child in the fireplace. They leave without a second thought but when Tommy's aunt dies a few weeks later and they have to return to the rest home, Tuppence decides to follow up with a nagging feeling about the old woman. When they find out the woman has been moved out of the home, Tuppence becomes suspicious and sets off on an adventure to locate the missing woman. This book was enjoyable, especially as Christie does a great job of writing bright and capable older characters.

Then I turned on the movie. The first obvious difference was the fact that they had somehow turned the story into a Marple script. I wondered how they would accomplish this. Apparently the only way they could manage it was to turn Tuppence from a strong, bright and adventurous woman into a simpering, alcoholic nag. Instead of showcasing Tommy and Tuppence's loving and fresh relationship, the movie version decided that they should be all but estranged. This was such a ridiculously bad mangling of this story.

Book versus Movie Verdict: Read the book, skip the movie.

Hoping to be the brilliant sort of retiree,
K


Buy By The Pricking Of My Thumbs