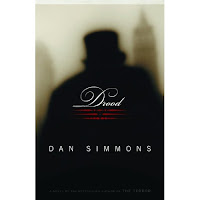 When I was offered the chance to read a novel starring two of my favorite authors as the main characters, Wilkie Collins (as narrator) and Charles Dickens, I jumped at the chance. Drood, written by Dan Simmons, is a psychological thriller based in Victorian London. Charles Dickens is in a life-changing train accident -- perhaps too life-changing. Has he become part of a dark underworld of drug addicts, murderers and mind-controlled minions? His friend Wilkie Collins follows him to the lowest depths to find the answers.

Simmons obviously did copious amounts of research and he has possibly included every biographical fact about Dickens and Collins that is available. He has written a very tangible portrait of London, especially its seamy underbelly, in the late 19th century. Unfortunately, I didn't enjoy this book as I thought I would. Many of the highly positive reviews I have read of the novel mention that the reader hasn't read much or any of Dickens or Collins books. I, on the other hand, have read many of their stories and I just didn't find the writing convincing as the work of a 19th century novelist, especially Collins, whose style I am very familiar with. The writing isn't bad, it just isn't this particular novelist's voice.

I also disliked the way that Dickens and Collins were portrayed. I have read books where some of my literary heroes, both fictional (Sherlock Holmes) and non-fictional (Edgar Allan Poe), have been turned into villains but they were still always written as true to character. This book takes liberties with the character and habits of these men to a degree that I was uncomfortable with. I worry that this book could give people false impressions of these men and their works.

I did enjoy the way that Simmons incorporated novels such as Bleak House and The Moonstone into the book. There were some interesting insights into the books and the process of writing a serialized novel. I also appreciated the emphasis on some of the social issues of the time -- the same issues that Dickens himself wrote about -- especially poverty.

This was a unique story but I think that some parts were just a bit too far-fetched and violent and the ending seemed rushed. After over 750 pages, I would have appreciated a bit more closure. If you haven't read any books by Charles Dickens or Wilkie Collins and are interested in them, go pick up a nice Oxford edition and read the biographical information at the beginning. If you want a Victorian thriller and don't mind if the characters are true-to-life, this book is for the most part entertaining. Drood is available on February 9th.

Avoiding the seamy side of town,
K