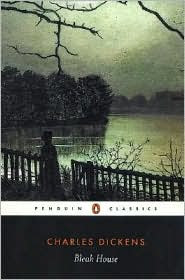 If any book title seemed designed to detract readers from approaching a book, I believe it would have to be Bleak House. Charles Dickens' first sentence doesn't offer much hope for an interesting book either. However, it turns out that Bleak House has some amazing characters, a mysterious plot and relatively little of Dickens' legendary long and tedious descriptions.

The main narrator of the story is Esther Summerson, an orphan who knows nothing of the circumstances of her birth or life before being placed with her current guardian. She is only told that her birth was a disgrace to her mother and herself. When this guardian dies, she gains the much more sympathetic and kind guardian, John Jarndyce, who also does not know anything of Esther's history. He also becomes guardian to two of his young cousins who are wards of the court -- Richard and Ada. Bleak House is the story of Esther's discovery of her true circumstances, Richard and Ada's love story, and many friendships and deeds, both good and bad.

The first two chapters of this book are difficult to get through but you become completely engaged in the story in the third chapter when Esther begins her narration. The most difficult (but rather essential) plot element of the story is a long-standing lawsuit over an inheritance called "Jarndyce and Jarndyce". It is this suit that holds up the futures of Richard and Ada as they wait in vain for an end to the litigation that has lasted generations. It is also this suit that causes John Jarndyce to take in his cousins and to try and break the suffocating hold that the suit has had over his family. Bleak House, the appellation of the Jarndyce home, is in fact a name that was established by a former Jarndyce who tried to resolve the court case but instead lost his hope and eventually took his own life over the futility of progressing anything through the courts of England.

As in all other Dickens stories, we receive his social commentary, discover kindness and dignity among the lower classes and shamefully bad behaviour by some who could afford to act better. I'm glad that I finally read this novel and would suggest it to anyone who enjoys Dickens and has a couple of weeks of free reading time.

on Amazon or find it at your local library.
Posted by Kristen M. at 12:34 AM