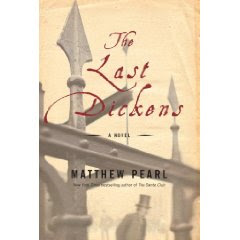 After my recent disappointment with Dan Simmons' Drood, I was excited to see that an author that I enjoy had also just written about Dickens' final unfinished novel The Mystery of Edwin Drood. This book is The Last Dickens by Matthew Pearl, released last week by Random House.

The main character in this book is the non-fictional James Osgood, a Boston publisher with Ticknor and Fields (which later became Fields, Osgood, & Company). This was the publishing house for such notables as Whitman, Longfellow, Emerson and later Mark Twain. They had the American publishing rights for Charles Dickens' later works and this novel concerns the time when, after hearing of Dickens' passing, Osgood and a female bookkeeper are forced to travel to England to search for the possible remaining parts of the story of Edwin Drood. They are in a race against time as the Americans don't respect British copyrights so as soon as other firms (in this case the Harper brothers) get copies of the Drood manuscript, they will begin printing their own competing copies of the novel. Osgood and Miss Sand are also being thwarted and menaced by an unknown villain who is seeking the same manuscript for his own personal reasons.

This book is a fascinating look into the publishing industry in America and is also a very compassionate and compelling look at the final years of Dickens. The mystery presented in this book is strong and I appreciated that there was no supernatural element in the story, as there was in Drood. This book also addresses the entry of women into the workforce and the hurdles they faced both in and out of the workplace. All of the historical information in this novel is incorporated seamlessly and it has a very authentic feel. I really enjoyed this book and was only disappointed that it mentioned Wilkie Collins in passing but did not have him as a character.

I recommend this book and if you haven't read Pearl's other novels, The Poe Shadow and The Dante Club, they are also books that feature authors as characters and are very well researched and written.

Wishing that no novel was left unfinished,
K


Buy The Last Dickens: A Novel