Early Review: The Sweetness at the Bottom of the Pie 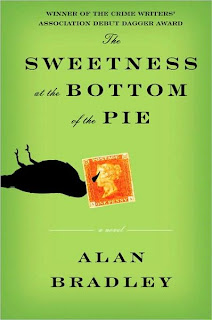 If any author has ever been farther away from their main character than 70 year old Canadian Alan Bradley is from eleven year old British Flavia de Luce, it could only be in a fantasy. Yet somehow Bradley has crafted a young detective that is bright, impetuous and strong in his first Flavia novel, The Sweetness at the Bottom of the Pie. This novel won its first award before it was even published.

Flavia De Luce is an eleven year old with the soul of a much older woman. She loves chemistry, especially poisons, and has her own lab thanks to a relative a few generations before. She has two bossy older sisters and a distant father -- her mother died when she was a baby. She compensates by immersing herself in science and exploration. She becomes a detective when she finds a man dead in the cucumber patch and suspects that her father had something to do with it.

The writing in this book is fantastic and was actually the only small disappointment I had because it wasn't quite believable as the voice of an eleven year old, however mature she may be. However, there are much worse complaints that one can have about a book so I can forgive this! One of the elements of the mystery was also obvious early but I think that might have been on purpose because we can't expect a young girl to reason as well as an adult.

This book will be available tomorrow, April 28, from Delacorte Press. It is meant to be the first in a series. The second book is supposedly already finished and Bradley is working on the third.

Thinking about stocking some antidotes,
K


Buy The Sweetness at the Bottom of the Pie