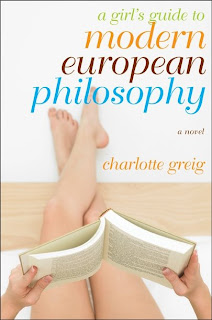 I went out on a topical limb and agreed to read the new-to-the-U.S. A Girl's Guide to Modern European Philosophy by Charlotte Greig. This book, set in 1970s England, is the story of a college-age philosophy student, Susannah, who must make the most important decision of her short life when she finds out she is pregnant. To complicate the issue, she is most likely pregnant not by the 30-something antiques dealer that she lives with but the young philosophy student that she has been having an affair with for the past few months. Because she is still finding her way in the world, she turns to the philosophers that she is studying in an attempt to build her own belief system.

This book started out promisingly with the revelation of Susannah's settled but lonely life and her search for happiness. Unfortunately, I shortly became annoyed with Susannah and her dishonesty and ambivalence. It wasn't that the character was badly written -- in fact I believe it was a rather accurate portrait of many college age youth. I think it was rather that I no longer relate with or have sympathy for this sort of character -- the student that hasn't found their way in the world and takes each philosophy they encounter to heart as if it was the greatest truth they had ever heard ... until they hear the next one.

Some parts of this story were poignant and touching but others were just obvious and stereotypical. Also, the ending was strangely abrupt. And yet I didn't dislike this book. I guess I would say that the plot of the novel was thoughtful but the execution was a bit uneven. As this is Greig's first novel, I think she shows promise but perhaps this one needed a bit more direction and a few less stereotypes.

Happy to be settled in my own life philosophy,
K