New Release: The Last Prince of the Mexican Empire 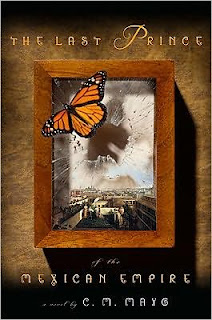 One of the shortcomings of many a historical fiction is the taking of sides -- glorifying one side of a conflict and demonizing the other. C.M. Mayo's The Last Prince of the Mexican Empire takes the moral high ground and gives the story of Emperor Maximilian von Habsburg from all different perspectives, admitting that in this complex situation, there were probably good intentions on all sides as well as bad.

After America failed in their Mexican conquest attempt and became embroiled in its own Civil War, France decided to step in and send troops and a new Catholic leader to the country. The chosen regent was Maximilian, Archduke of Austria. He grudgingly went to Mexico and became Emperor, bringing along his wife Charlotte. As they hadn't produced an heir, they decide to name as their heir the two year old Agustín de Iturbide y Green -- the son of an American mother and a Mexican father. This story is told from the points of view of all the parties involved and also military and household personnel.

This novel is very even-handed and though it is somewhat difficult to follow at first with the movement between narratives and time periods, once you get used to the style it's a fascinating and engaging book. Mayo has done extensive research and this time period in Mexican history really comes alive through her writing. Sympathies change as different viewpoints are voiced and you come to realize the complexities of this political situation.

Mayo plans to write a second novel that continues the story of Agustín. I will definitely look for that one.


Buy The Last Prince of the Mexican Empire