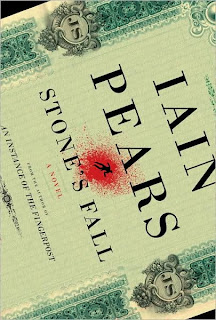 I have read everything written by Iain Pears and so I feel qualified to say that Stone's Fall is some of his best work. This is a lengthy novel at 800 pages but is quick-reading, as evidenced by the fact that I got through it in five days!

The novel is written in three parts. The first is by Matthew Braddock, a journalist charged with trying to track down the illegitimate child mentioned in the will of recently-deceased financial genius John Stone, Lord Ravenscliff. This youngish man begins the probing of John Stone's past but runs up against secrets whose answers are hidden in the past. The second and third accounts are by Henry Cort, a British intelligence boss, and John Stone himself, respectively. These earlier reminiscences fill in the story and reveal many of the mysteries that Braddock was unable to solve.

The depth and layers of this novel were staggering. And yet somehow Pears manages to tie up dozens of loose ends in a mostly satisfying manner. The characters he creates in this story are complex and my opinions of the main players changed frequently throughout the different narratives. Some readers have said that they were confused or turned-off by some financial language used in the novel but I felt that it was really negligible and did not dominate the narrative. Overall, this is a complex page-turner that is worth revisiting at some point. I would love to read it again with the omnipotence that I gained by the end.

If you are in the Seattle area, Iain Pears will be at Third Place Books (Lake Forest Park) tonight at 7pm. I'm hoping to be there!

on Amazon or find it at your local library.
Posted by Kristen M. at 12:20 AM