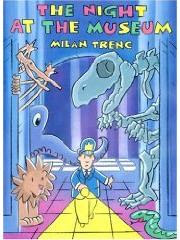 Last weekend we went to the bookstore and chose Milan Trenc's picture book The Night at the Museum. We had seen the Ben Stiller movie many times but didn't know until recently that it was based on a book. As this is only a thirty page picture book, I guess we could say "loosely based". This is a cute book about Larry who starts on his first night as a security guard and falls asleep only to find that the dinosaur skeleton room that he was guarding is now empty. He goes around the museum and finds that everything has come to life -- the animals and even the representations of people! He spends the whole night working hard to feed and exercise all of the animals and learns how things work in this unique job. 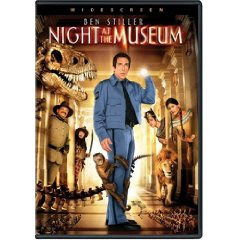 The film version of this story obviously had to have a more complicated story in order to fill the movie so there is a light-hearted conspiracy added. The guard, Larry, is also given an ex-wife and a kid and the issues that come with that. And last, but not least, there's a museum docent as a love interest. It's a little cheesy in parts but it also has some good messages about working hard and using your brain. The book doesn't really have a message, just an idea.

A sequel, Night at the Museum 2: Battle of the Smithsonian, is in theatres now but we will probably just wait to see it on DVD.

Verdict: Let your kids watch the movie but definitely take a look at the book. It's full of fun animals and spunky security guards and is appropriate for all ages!

Wishing for one magical night with the dinos,
K and Z


Buy the book The Night at the Museum