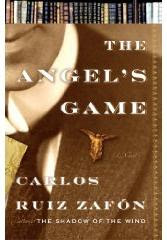 Just as I thought would happen, once I started reading Carlos Ruiz Zafón's new novel, The Angel's Game, I couldn't put it down.

This book is a prequel of sorts to The Shadow of the Wind. This book happens in the time when Sempere Sr. was himself the son of the bookseller, living in the shop above the store. The Semperes are not the focus of this story, however, but rather a young writer named David Martín. David is an orphan, raised in the newsroom of a local paper and supported by the generosity of a wealthy benefactor. He is given the opportunity to write but only under pseudonyms and in a base style for the masses. David is tired of not getting credit or compensation for his efforts so when a mysterious publisher contacts him about writing one world-changing book, he enters a bargain that he will come to regret. Again touching on the themes of love and loss as he did in Shadow, Zafón also ventures this time into the murky region of good and evil. Though this book enters the realm of the supernatural, it spends most of its time in the darkest parts of man's own soul.

This book again takes us through the most glorious and also the most destitute parts of Barcelona. Luckily, David takes us again to visit The Cemetery of Forgotten Books and we actually learn more about this mysterious library and its history. The supernatural element disappointed me a bit only because The Shadow of the Wind was so fantastic at exploring only the hearts and minds of men. Still, this was an interesting study of the basis of religion and the forces and motives behind it. The mystery itself was strong and there were parts of the narrative when I couldn't tell at all what direction it would take. This was a strong second offering by Zafón.

This book will be released next Tuesday (June 16).

Wondering if a visit to modern-day Barcelona would ruin the magic,
K