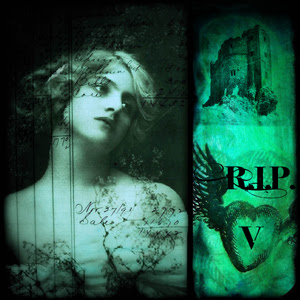 One of my favorite reading times of the year is upon us -- the start of Karl's Readers Imbibing Peril (R.I.P.) Challenge!  This is the fifth year of the challenge but only my second year participating.  I believe it was originally an October challenge but was expanded to include September (to the delight of many!).  Last year, I went far above and beyond the four books I signed up for.  I'm sure I will surpass it again this year so I'm going to make my own Infinite Peril category!  I've decided this year to read almost entirely from my own stacks.  I've sorted my TBR shelves and have come up with many, many choices!  Here are pictures of the almost two shelves that I have dedicated to the challenge. 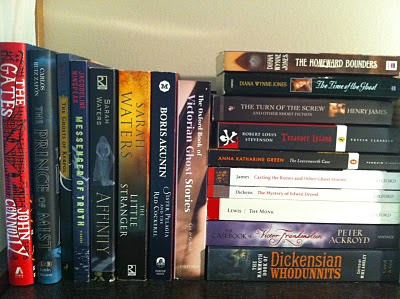 by John Connolly (YA, supernatural, horror)*
2. The Prince of Mist

by Carlos Ruiz Zafon (YA, ghosts)*
3. The Ghosts of Kerfol

by Diana Wynne Jones (youth, magic, adventure)
10. The Time of the Ghost

by Diana Wynne Jones (youth, ghosts)*
11. The Turn of the Screw

by Anna Katherine Green (mystery, murder)
14. Casting the Runes and Other Ghost Stories

by Charles Dickens (murder)
16. The Monk

by Matthew Lewis (murder)
17. The Casebook of Victor Frankenstein 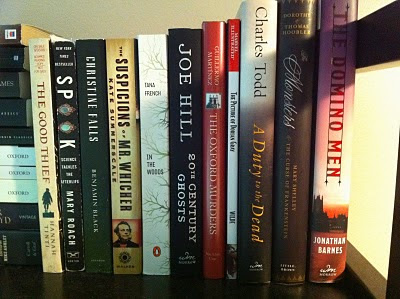 by Kate Summerscale (non-fiction, murder, history)
23. In the Woods

by Guillermo Martinez (mystery, murder)
26. The Picture of Dorian Grey

by Oscar Wilde (graphic novel, murder, supernatural)*
27. A Duty to the Dead

by Charles Todd (series, mystery)
28. The Monsters: Mary Shelley and the Curse of Frankenstein

by Dorothy and Thomas Hoobler (non-fiction, monsters)
28. The Domino Men 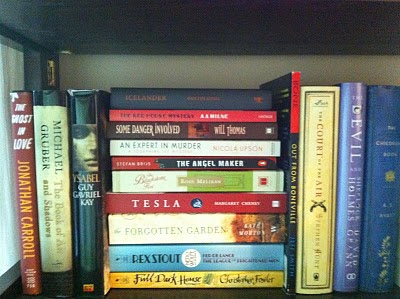 by Jonathan Carroll (ghosts)
30. The Book of Air and Shadows

by Will Thomas (series, murder, detective)
35. An Expert in Murder

by Rose Melikan (mystery)
38. Tesla: Man Out of Time

by Kate Morton (mystery)
40. Fer-de-Lance and The League of Frightened Men

by Christopher Fowler (series, mystery, detectives)
42. Bone: Out From Boneville

by Jeff Smith (youth, graphic novel, ghosts)
43. The Court of the Air

by Stephen Hunt (adventure)
44. The Devil and Sherlock Holmes: Tales of Murder, Madness and Obsession

by A.S. Byatt (mystery)
Wow.  I certainly buy books of a certain mood, don't I?  Last year I got through eighteen books in two months.  We'll see how I do this year.  I think my unofficial goal will be twenty.  It will be nice to make a decent-sized dent in my TBR stacks.  If you want to see other reviews as they go up or link to your own reviews, the site is here.

Oh, and there's also a film component this year, Peril on the Screen.  Don't worry!  I have plenty of those as well (almost 50 DVDs that should qualify!).  I'll kick it off this week with Dorian Gray

(which I finally got on Netflix) and go from there.
Are there any of these books that you can recommend or that you would like to see me read?  I've put stars by the ten I think I'm most likely to read and then the rest will be decided as I go along.

Hoping the leaves start changing soon to set the mood,
K
Posted by Kristen M. at 12:13 AM