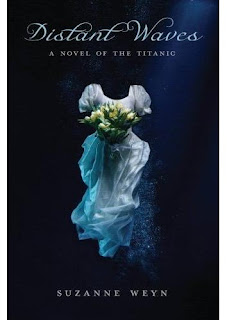 A couple of months ago this book caught my eye and I finally just got the chance to read it. I was attracted to Suzanne Weyn's Distant Waves: A Novel of the Titanic because it featured Nikola Tesla. While it turns out that Tesla is not a major character in the book--though he has a major influence on events--it has much more to offer readers.

Jane Taylor is the second of five sisters being raised by their widowed mother. When Jane is only four, her mother decides to move the family to Spirit Vale, a spiritualistic community near Buffalo, New York. Here Mrs. Taylor takes up as a medium and the girls grow up in a very unconventional way. The story picks back up when Jane is sixteen and decides she wants to be a journalist. She decides to enter a contest by writing about Nikola Tesla, whom the family met once. She finds out that he lives at the Waldorf-Astoria in New York City and she and her older sister Mimi sneak off to NYC hoping for an interview. This trip ends up being the beginning of a chain of events that changes these girls' lives forever.

This is a hard book to summarize because it really has a lot of different interlaced plot threads. It addresses spiritualism in the early 1900s, the work of Nikola Tesla and Sir Arthur Conan Doyle and the disaster of the Titanic. There are love stories, family conflicts and business deals. This makes for a very fast-paced book that certainly whets one's appetite to delve further into some of these events. My only problem with the book was that it didn't seem to be well edited. There were a couple of wrong words, some timing discrepancies (like changes in the age gaps between the sisters) and some continuity issues (Jane rides a train to New York when she is four and then gushes when she goes on her "first" train ride when she is sixteen). The initial dialogue in the book is also a bit strange with a four year old and a six year old having a discussion about postmarks. Their voices weren't written any differently than when they were teens. Despite these small flaws, this book was very interesting and I sped through it, waiting to find out what befell the Taylor sisters.

Looking forward to the next time I meet Tesla,
K


Buy Distant Waves: A Novel Of The Titanic

on Amazon or find it at your local library.
Posted by Kristen M. at 12:20 AM