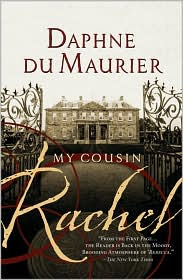 After finally reading Rebecca, I felt very lucky to have a review copy of another Daphne du Maurier novel, My Cousin Rachel. This one has been recently re-released by Sourcebooks and I am so excited for readers to rediscover it!

The story is rather simple. Young Philip is raised by his bachelor cousin Ambrose. While away in Italy for his health, Ambrose meets and improbably marries a distant cousin, Rachel. Philip starts receiving troubling letters from Ambrose and eventually is worried enough to travel to Italy. However, he arrives too late and finds that Ambrose has died and Rachel has left. Philip vows his revenge against the woman that he believes responsible for his guardian's death and returns to England. Three weeks later, Rachel shows up at Philip's home. He is prepared to hate her but is surprised by her kind manner and deference to his feelings. He eventually falls madly in love with her. Will this lead to his downfall the same way that it led to Ambrose's?

While reading this book, I kept comparing it to Wilkie Collins' Armadale. It was similar with the older woman that comes into the life of the younger man. But while in Armadale you are fully aware of Lydia Gwilt's vengeful plan and her deception of young Alan, in this book you aren't sure of Rachel's history or intentions. Yet this story gives the same feeling of discomfort as you read about the downfall of an innocent, if naive, young man.

This novel has the same attention to detail that Rebecca had and presents another beautiful country estate for readers to covet. While the story wasn't as heart-breaking and emotional as Rebecca, it was definitely entertaining and suspenseful.