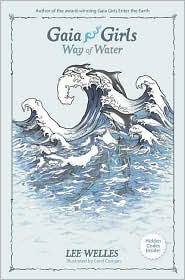 While my first book for the Take a Chance Challenge worked out incredibly well (Judge a Book By Its Cover), my book for Phoning an Author was pretty much the opposite. I had major problems with my selected book and decided to quit reading it after 96 pages.

Phoning An Author. Pick a random last name out of the phone book. Find an author with the same last name and read a book by them. Write about it. (I'm flexible ... if the first random name you pick is Xprxyrsss, you can pick again!)

As I explained in my original challenge post, in this internet age we no longer keep a phone book in the house so I got out the only other book I had with lists of names, my AMC Classic Movie Companion. I went to the actor list at the end and randomly selected Orson Welles. From this I looked and found Gaia Girls Way of Water, the second book in Lee Welles' pre-teen Gaia Girls series. I liked the cover and illustrations and with my marine zoology background, I thought it would be right up my alley. I was also interested to read a book set in Japan. However, there were aspects of this book that bothered me to the point that I lost interest and that would also keep me from wanting a child of mine to read this book.

This is the story of Miho, a ten year old Japanese-American daughter of whale biologists who are lost at sea. Her only family is her mother's brother in Japan and so she sets off to a country where she holds citizenship but knows nobody and close to nothing about their culture. Despite her hopes, she finds her uncle to be unfriendly and inattentive. When they take a trip to his childhood home for O-bon, the festival for the dead, Miho has strange visitations from an otter claiming to be Gaia, the earth spirit.

And this was as far as I got because I couldn't stand it any longer. The plot was fine up to this point and the descriptions of the ocean and its inhabitants were well written. My main problem was with the portrayal of the Japanese in the story. Not only were they almost all rude, starting with the flight attendants who made fun of her in Japanese to her face, but the author actually wrote in that stereotypical Japanese-speaking-English way that comedians use. For example, an old man says "No spoke Engrish for ... long time". Yes ... "Engrish". This was incredibly irritating and would be the main reason why I would keep this book away from my child. I don't want the Japanese English pronunciation stereotype being brought to my kid's attention and being presented as the standard.

My next problem was the anti-smoking message. Now, don't get me wrong, I am strongly anti-smoking and I will teach Z the reasons why choosing to smoke is a bad idea. However, this book repeats the message over and over to the point that it's distracting. Miho's uncle smokes and every single time he walks into a room she has to mention the smell that is on his clothes. Each time he pulls out a cigarette, the author calls it a "stinky stick" or gives some other negative description. I don't know the purpose of literally mentioning the smoking on almost every page the uncle is on.

Finally, there was just too much drama. Every time this kid hears or sees something she wasn't expecting, she gets weak in the knees, her legs get heavy or she stops breathing. This made sense when she was being chased by a shark at the beginning of the book but doesn't make as much sense when she merely sees a pod of dolphins in a bay or finds out she will be taking a ferry ride. This book also has a plethora of exclamation points and italics which are distracting and unnecessary.

I guess the point of the Take a Chance Challenge is to try something new without knowing if it will be good or bad. It didn't work out so well in this case but that's the chance part! I wouldn't have picked up this book otherwise but I might try another young reader book, even one with an environmental message. I wanted to like this book but I just didn't think it was very good.

Thinking about writing my own series,
K