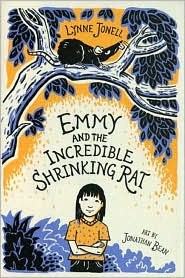 Some book titles are irresistible like Lynne Jonell's Emmy and the Incredible Shrinking Rat. I had to read this book! Z also had an interest in this book but not because of the title. He found the "art" by Jonathan Bean -- a flip-book type illustration through all the pages of a rat falling out of a tree.

Emmy is a young girl who had a happy life with her parents, living above the bookstore they owned, until they inherited money and a mansion from a distant uncle. Along with the mansion came a nanny, Miss Barmy. Emmy's parents start traveling incessantly and neglecting her and Barmy becomes Emmy's main caretaker. She has strange home remedies for Emmy's non-existent health problems and insists Emmy visits the school psychologist regularly for non-existent mental problems. However, Emmy is a good girl and and doesn't question any of this. She also doesn't question that nobody in her class seems to notice her even though she is an A+ student. The only one that seems to notice her is the classroom rat, Rat. He notices her so much that one day he speaks to her. This is the start of an incredible adventure that reveals some hidden truths, some bad magic and some true friendship.

This was a an inventive and amusing book. The writing is a bit simple but the plot keeps you moving forward. Emmy is really likable and smart. There is a sequel to this book, Emmy and the Home for Troubled Girls, that I will definitely look for.

Living in a world with no magical rats,
K


Support this site and buy Emmy and the Incredible Shrinking Rat