"Moonlight fell on Elinor's bathrobe, her nightdress, her bare feet, and the dog lying in front of them." 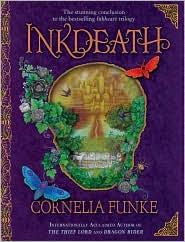 I didn't want to wait any longer and so I read the third and final book in Cornelia Funke's Inkheart trilogy, Inkdeath. There was a lot that was satisfying, some that wasn't but this book definitely kept the same feel and spirit of the other two books.

It's hard to summarize the plot without giving away tons of stuff from the other two books. I know there are some of you who are reading the series so I'm going to skip it. The general idea of the story is just that everyone has to keep maturing, figuring out what they want from life and deciding who to love and trust. In the second book, I complained that some parts seemed to move too slowly but in this book I would actually complain the opposite. This book could almost be expanded into two and, at 663 pages, it wouldn't have been the worst idea! There were some parts that seemed to be missing transition elements. I would think that Funke wrote them originally but then they got cut.

Now that I've finished the series, I'll give you my final series opinion. If you want to read just one book, read the first. It's well executed and could easily stand alone. The other two books presuppose too much character knowledge. To be honest, I didn't love the second and third books as much as the first. Some of the characters became too set in their annoying ways until the very end. Still, if Z wants to read this series at some point, I see no reason why he shouldn't. There are certainly some violent elements that I wouldn't want him reading at too young of an age but it is a unique idea and a strong story.

Looking for the next series,
K


Support our site and buy Inkdeath